The printed paperback edition is available worldwide via the ISBN 978-3943747065. You can order it electronically from Amazon.

This books starts with an introduction into distributed version control systems. It continues to describe the basic Git terminology and how you can configure your Git tools.

As the book advances you learn how to connect to remote repositories and how to use branches and tags. The book covers merging and rebasing changes and provides all the necessary tips and tricks to use Git.

It also covers the usage of the popular online Git hosting platforms GitHub or Bitbucket and describes typical Git workflows which are considered as good practice.

In case you find errors which have not yet been reported, please send an error report by email to: erratabooks@vogella.com . 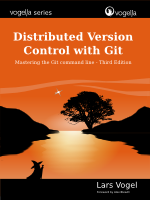