Contributing to the Eclipse IDE Project

The printed paperback second edition is available worldwide via the ISBN 978-3943747157. You can order it electronically from Amazon.

This e-Book is available as a free download here.

It also includes a short introduction into JUnit tests and how to run the platform unit tests.

Afterwards tools to analysis the Eclipse code base are presented and it is explained how to build the Eclipse IDE itself.

The last chapters contains short information and interviews with Eclipse project leaders about how to contribute to selected popular Eclipse projects like SWT, JDT, CDT and Tycho.

In case you find errors which have not yet been reported, please send an error report by email to: erratabooks@vogella.com.

Errata for the second edition

In 3.1. Eclipse top-level projects the "Internet of Things" is listed twice in the print edition. 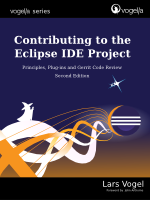