The printed paperback edition is available worldwide via the ISBN 978-3943747041. You can order it electronically from Amazon.

This e-Book is available exclusively on Amazon as a Kindle Edition. You can read it on a Kindle device or any other modern smartphone and tablet using the Kindle app.

This book gives an introduction into using the Eclipse IDE for Java development. It assumes no previous knowledge of the Eclipse IDE and can be used by a new user to learn the Eclipse IDE. Instead of presenting all possible options, this book focuses on the important parts of the Eclipse IDE, e.g. how to navigate efficiently, which settings helps you to get more productive and the like.

It also contains lots of tips which allow advanced Eclipse users to work more productively with the Eclipse IDE.

You learn how to create Java programs with Eclipse and how to run them within and outside of Eclipse. Debugging and unit testing are an important part in the daily work of a developer therefore these topics are also covered in detail.

You find lots of examples and exercises to practice.

In case you find errors which have not yet been reported, please send an error report by email to: erratabooks@vogella.com . 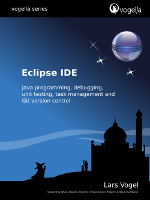